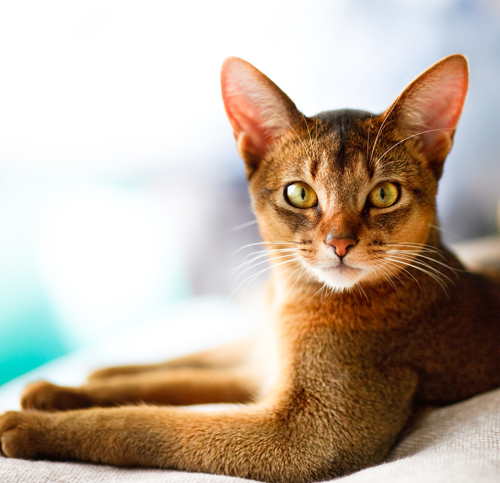 The Abyssinian is known for being a timid, companion orientated, slim cat, with a “tickled” coat. This is an old breed, it was recognized in the 1800s in the UK and in the early 1900s in USA. They are famous for their wildcat appearance and coloring, however their personality is completely different. The Abyssinian is a highly intelligent and playful cat. They make a perfect pretty pet.

History
The exact origin of the Abyssinian is quite vague, but the accepted theory is they were brought to England in the late 1800’s from Ethiopia (formerly known as Abyssinia). Although the primary breed was from Ethiopia, there has been considerable cross-breeding with Siamese cats as well as British short-hair cats to produce the characteristic cat we know of today.

The defining feature of this cute kitty is the “speckling” of their hair. This means there are multiple different bands of color on each follicle, so each hair has around 3-4 different genes expressed on the one hair. Generally they have a grey or clear undercoat as well. This type of genetic hair coloring is actually a characteristic of “wildcats” but this particular breed is far from wild. There are 5 recognized colors; tawny, cinnamon, blue, fawn and silver.

Also, their bone structure is very slender and they have a medium size. They are known for having a wedge shaped head and they have a distinctive tuft of hear at the tips of their ears. This breed does have quite a “wild” appearance and their wide eyes are green or hazel with dark rims. 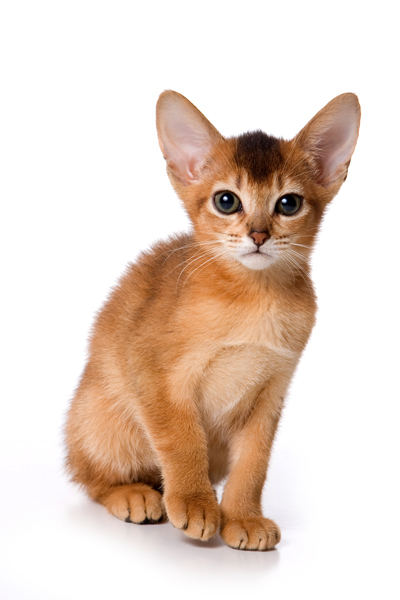 This playful cat breed is known for their intelligence, fun personality, extroverted and willful personalities. They do require a lot of attention and can become depressed if they are not stimulated enough. They are known to be a very companion-orientated and they strongly bond to their human companions.

To strangers they can often be somewhat shy and timid. They can frequently hide from new people and be very cautious until their trust is earned.

In the family home, female cats do prefer being the only cat in the family however males do enjoy the company of other cats and pets. Both male and female cats can also enjoy the relationship with dogs, but it is their human companions are top priority to the Abyssinian.

Additionally, if you do have an Abyssinian then it’s important to have a cat run or take them for walks so they have a chance to run, climb and play. They do require a lot of physical activity, so it’s important you keep them stimulated with exercise regularly. 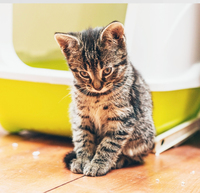